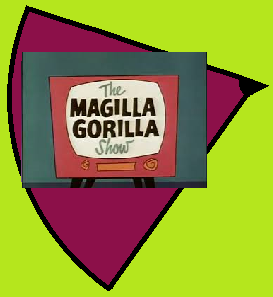 The Magilla Gorilla Show was an animated series for television starring Magilla Gorilla. The series was produced by Hanna-Barbera for Screen Gems between 1963 and 1967, and was originally sponsored in syndication by Ideal Toys from 1964 through 1966. The show had other recurring characters, including Punkin' Puss & Mushmouse, and Ricochet Rabbit & Droop-a-Long. In syndication, the main and supporting characters from the Peter Potamus show were also added. Like many of Hanna-Barbera's animal characters, Magilla Gorilla was dressed in human accessories, sporting a bow tie, shorts held up by suspenders, and an undersized derby hat.[1]

Magilla Gorilla (voiced by Allan Melvin[1]) is a gorilla who spent his time languishing in the front display window of a pet shop run by Melvin Peebles (voiced by Howard Morris), eating bananas and being a drain on the businessman's finances. Mr. Peebles marked down Magilla's price considerably, but Magilla was invariably only purchased for a short time, typically by some thieves who needed a gorilla to break into a bank or by an advertising agency looking for a mascot for their new product. The customers always ended up returning Magilla, forcing Mr. Peebles to refund their money. Magilla often ended each episode with his catchphrase "We'll try again next week." The trials of Magilla mirrored the attitudes that American citizens had towards racial integration during the Civil Rights Movement in the 1960s. Some say The Magilla Gorilla Show perpetuated the idea that non-whites should be segregated, with Peebles selling Magilla to white customers who would invariably return him to the pet shop by the end of each episode.[2]

Ricochet Rabbit (voiced by Don Messick) works as the sheriff of Hoop N' Holler with his deputy Droop-a-Long Coyote (voiced by Mel Blanc). Outside of his super-speed, Ricochet Rabbit uses his trick bullets in order to help him take down and apprehend criminals.

Retrieved from "https://cartoonhalloffame.fandom.com/wiki/The_Magilla_Gorilla_Show?oldid=13640"
Community content is available under CC-BY-SA unless otherwise noted.